When Andrew Essink didn’t have the funds to buy the guitar he wanted, a suggestion from his father changed the path of his life.

There are almost as many reasons for choosing to build your own guitar as there are guitar builders, but choosing the self-build option because of lack of funds wasn’t what we expected when we asked Andrew Essink of AE Custom Guitars how he got started.

I was actually starting to shop for a new guitar and realized that as a part-time employed college student I had no funds to purchase anything of quality that I started looking more in depth at the guitar, and when speaking on a whim with my Father he basically said well "why don't you build one."  I really never second guessed him.  Started immediately designing and researching,’ said Andrew. 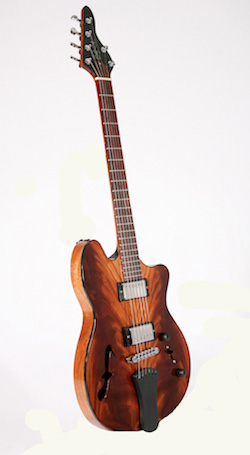 That first guitar had several influences, and Andrew pulled them together as he developed style that has served him well in the years since. ‘That first guitar was based on a LP Double Cut that I fancied,’ he explains. ‘Although I really liked my Grandpas 68 ES335 hollow body, so I opted to hollow out the Alder body and design a special "F" hole for the Quilt Maple top I purchased.  The "F" hole to me had to be traditional like a violin with the F shape, but I also made mine resemble a mushroom graphic "cut-out", which eventually became my standard F shaped "F-hole" which is unique but traditional looking.’

On a first build, keeping things simple is never a bad idea, and Andrew decided to do just that. ‘I also opted on the first to buy a Carvin guitar neck, so as to minimize need for specialty tools, but maximize my success.  I did things pretty simple on that first guitar, but it turned out well, and I actually got to play it with my old band on stage and in the studio, but I kept wanting and started designing the next shortly thereafter,’ he explained.

As with every guitar builder we’ve spoken to, Andrew is driven by a love for his craft and a desire to build the best guitar he possibly can, every time. ‘All of my guitars are custom, one-of-a-kind designs, and are built by me in my shop one at a time.  No fancy jigs, no computer tooling, just me!  I take pride in that individuality, I consider the guitar my canvas’ he enthuses.

And what about the end result, we wondered. What gives him the most satisfaction? ‘seeing the completed guitar function as it was designed, and signing off on the canvas that it is complete and ready for the musician to start making their own art.  I've always treated my guitars this way, each their own unique creation.  My guitars have names and birthdates, not serial numbers.’

And what, we asked, does Andrew Essink consider the most important part in building a guitar? ‘The design,’ says Andrew, firmly. ‘All the details of a design have to be carried through to completion so that the guitar functions as it should.  A well designed guitar also needs to be set-up as such so that it plays equally as well.  Again this is all included in the design of the instrument, and that is why I believe many of the tried and true instruments are such, they are designed well and proven over time to be such.  You got to have a solid plan of action.’ 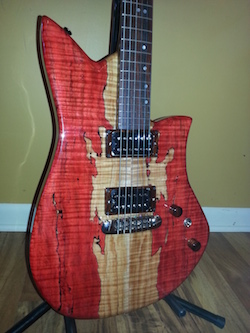 As for where to spend those limited funds, ‘money spent on quality tools is money well spent, however when you are first starting its hard to tell what tool will be best and which you may need or not.  So getting started think about something you really want to accomplish, research tools and methods, and start there.’

Before we leave Andrew in his workshop, he has one more piece of advice for us, about tone: ‘Everyones searching for something different.  Tried and true building methods and designs are a good starting point, as is working with quality parts/tonewoods etc, but they must be maintained throughout the build, and the guitar must be finished and setup properly to achieve best transfer of vibration from the strings.  If I do my part in designing/building/setup of the guitar then it will have the best tone possible, it is then left up to the cables/amp and the musicians themselves,’ he explains.