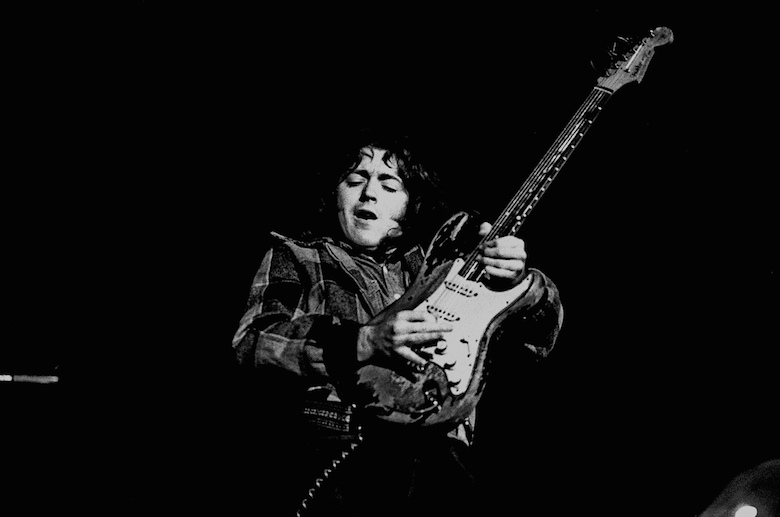 Rory Gallagher's Eggle JS Berlin Legend is the latest electric guitar to sell for a song at auction.

Rory Gallagher's custom-made JS Berlin legend has sold for $42,000 at an auction in the UK, according to the BBC.

The guitar, made by Patrick Eggle Guitars was given by Gallagher to a friend. Gallagher died 19 years ago, in 1995 at the age of 47, buy his influence can still be heard among many rock and blues guitarists.

Having grown up in Londonderry, Gallagher moved to Cork and formed Taste in the 1960s. During that period and later as a solo artist, he influenced the likes of Eric Clapton, Brian May, and Johnny Marr.

The auctioneer said that the buyer was from outside the UK, but wouldn't give any more details. 'In the end, the main interest was on the phone and the internet and ended up with three bidders going against each other,' said Kevin Kendal of 1818 Auctioneers.

The Berlin Legend model was made by Patrick Eggle Guitars between 1994 and 1997. According to the  website, its body had a 'Figured Maple back with highly figured Maple top.' The set maple neck had had and ebony fretboard and 24 frets with falling maple leaf inlays. Hardware came in gold or chrome, and there were a pair of Seymour Duncan covered Seth Lover pickups.

Eggle himself no longer makes solid body guitars. Having run guitar production at the company which bore his name for several years, Eggle left both the company and the UK, and settled with his family in North Carolina. There, he made acoustic guitars. According to his personal website, 'Whilst there he quickly gained a reputation for uncompromising quality and tasteful design, consequently forming partnerships with some of the finest guitar shops in the US along with forging great relationships with like-minded musicians and luthiers.'

Eggle and his family are now back in the UK, where he still makes acoustic guitars from his workshop in Oswestry, Shropshire.

You can see Gallagher's JS Berlin Legend being played in the video below.

Guitar builder Thomas Lieber has been making instruments for close on half a century. Naturally we wanted to pick his brains and find out what it takes to become a great guitar maker and how he recommends others get started. Read more here.