We love talking about the nitty gritty of making guitars, but we love hearing about it from the pros even more. 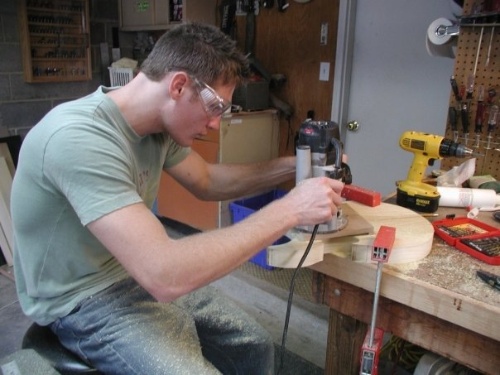 Chris hard at work in his workshop.

As part of a regular feature on Guitar Hive, we spoke to Chris Sundlof from Sundlof Guitars about how they got started and about the business of making guitars. Chris explained that he’s been making guitars for nearly ten years, having built his first one in 2004.

‘I’ve been playing guitar ever since I was 15. My father taught me to play on his 1963 Fender Jazzmaster. He and I have always been into building things and woodworking. One day after he had just finished a furniture project I said to him “We ought to try making a guitar Dad”.  He looked at me like I was out of my mind, but I persisted. I spent about two weeks convincing him that it was possible. Finally, he started to open up to the idea. We bought Melvin Hiscock’s Make Your Own Electric Guitar and spent a lot of time researching different forums online. We also started to discover that there was a huge luthiery community out there.

We learned about websites like stewmac.com, lmii.com, mimf.com, and so on. We also spent a lot of time learning about tonewoods. My father was already very familiar with different varieties of wood species, but I needed to learn a lot. We researched different construction methods, learned about different luthiers, and spent a lot of time in different online forums learning from various builders. After a few months of research we felt that we were ready to begin making our first prototype.’

That first protoype, however, was  nothing like the beautiful guitars Chris makes today, as he explained. ‘The first one was meant to be just a simple unspectacular bolt-on neck guitar. I designed the body by hand by drawing it out on a large piece of cardboard. I spent a couple weeks refining the lines until I got it just like I wanted. Although my dad and I had always played Fenders, we were more interested in the look and style of guitars like PRS and Gibson Les Pauls.’

For some of us, spending a two weeks adjusting a drawing for a prototype would be more than our patience could handle, but for Chris, it was just the beginning of a process that involved incredible attention to detail. ‘We spent a ton of time make jigs for pickup and control cavities, headstock and body jigs, and bridge and neck slots. We made sure to take tons of pictures too, so that first guitar is well documented. We built a couple of mockup versions before we were comfortable starting on the real thing. It’s a good thing we did, because we definitely made a few mistakes we learned from.’

That’s a terrific lesson for anyone thinking about making their first guitar: plan it in detail and take photographs at every point in the process.

‘The further into the project we got,’ explained Chris, ‘the more we realized we wanted to make it more of a high-end guitar. We decided to do a carved curly maple top with mahogany back. We even had the nerve to put curly maple wood binding with inner purfling channels on the body and headstock. We lost a lot of sleep some nights when we had a challenging step ahead of us. And bending all that wood binding sucked! We bought a high velocity low pressure spray system and even taught ourselves how to paint with nitrocellulose lacquer. The first guitar took forever to build, but in the end it turned out to be way better than we ever imagined it would be when we set out to make it. People really loved it and it looked and played beautifully.’

It’s clear from the time and effort that Chris and his dad put into that first guitar that they were passionate about it, which is just as well, given how much of their lives they spent building it. And, as anyone who has dedicated the bulk of their life to pursuing something they’re passionate about will tell you, when you commit, magic happens. 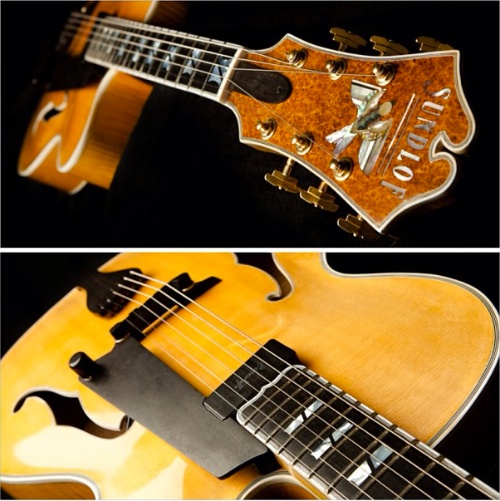 The time, effort, and passion Sundlof puts into making guitars is obvious.

‘When we saw the reaction everyone had when we showed them, we knew we had stumbled upon something special. I kind of chuckle now when I look at that original guitar. At the time when we built it we thought it was the most beautiful guitar we’d ever seen. I guess it’s supposed to look like that to you. Looking at it now, it doesn’t even compare to what we currently build.’

A decade on from that first guitar and Sundlof is running a successful business. ‘We just finished two custom Harpoon orders for some clients in Canada. Both clients had some very specific requests. They both turned out to be beautiful guitars. Our whole approach to building custom made guitars is to inspire people’s imaginations. We love it when we meet a new client or a fan that has a great idea for us.’

Given Chris’ wealth of experience in building beautiful guitars, it would have been remiss of us not to ask him for a few tips. He was happy to oblige. His first piece of advice? ‘Know your math. By that I mean spend a lot of time getting your geometry, measurements, and layout right. If you’re building a guitar you designed for the first time, it pays off to build a mockup model first.’

Anything else? ‘You’ll learn a lot from trial runs. And mockups can be vital tools for different experiments you want to try.’

One more tip? ‘Spend a lot of time up front getting your layout, design, and measurements perfect. All that time spent up front will save you a lot of disappointment later on.’

One of the biggest obstacles many first-time guitar builders face is lack of funds. We asked Chris where he would spend the bulk of the money on a limited budget. ‘Tools make the difference. And in guitar making, it takes an arsenal of different tools. Yes there are a lot of upfront costs when getting into guitar making, but your instrument will only be as good as the tools you use. Stewmac.com is a great source for specialized luthier tools, but there are lots of other woodworker resources out there too. You’ll need a variety of power tools, hand tools, and specialized guitar specific tools. So do your homework on what you’ll need. And if you don’t have the money for all the tools you need, start with a kit. There are lots of places that sell pre-made bodies, necks, and so on. We never went that route, but I don’t see anything wrong with it if you’re just learning.’

Then we asked the $60,000 question. How to get the best possible tone from a guitar you build. ‘I wish I could give you some magic formula,’ explained Chris. ‘But really it just comes from a lot of experience and hands-on learning. I will say though, learning about wood species and their tonal characteristics is very important. Any guitar builder really should have a strong understanding of tonewood and its application in luthiery. I fully admit that I am by no means a wood expert, but understanding the fundamentals of wood characteristics, the different ways in which wood is sawn, and how different species affect tone is very important. Learning about pickups is equally important for electric builders, but pickups are interchangeable so have fun experimenting.'

Before finshing up, we asked Chris about what it means to him to build guitars.  ‘My satisfaction in guitar making comes from seeing that vision in your head come to life as tangible functional artwork. Our Harpoon model started as a drawing on a restaurant napkin. That first Harpoon we ever made was so insanely satisfying because it was a design I had running through my head for about 6 years before I finally got to build it. There is no other feeling like seeing something that you once only imagined as an idea in your head come to life.’