The P90 is a popular choice for many guitars because of the punchy tone it delivers. It’s a snappier alternative to the humbucker. 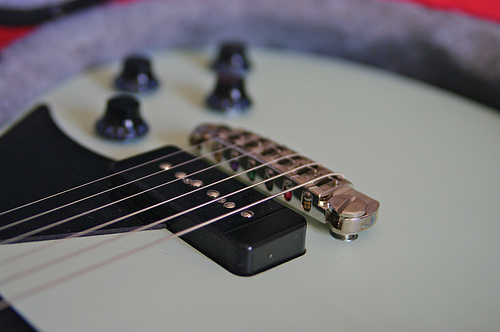 The P90 was introduced by Gibson shortly after the end of World War II and quickly became its standard choice pick-up, remaining in favour until the humbucker was produced in 1957. The single coil design means that it’s vulnerable to mains hum, something which the dual coils in the humbucker eliminate.

Despite the apparent advantages of the humbucker, however, this single coil pick-up refused to die. When Gibson introduced legacy model Les Pauls in the Sixties and Seventies, they had P90s, and a very different sound to their humbucker-clad cousins.

The P90 has a distinctive bright, punchy tone, that’s distinct from warmer, muddier tone of the humbucker, but also, from Fender’s single coil pick-ups. Fender pick-ups produce a snappier tone with more twang, and have 2,000 fewer coils than a P90. The punchy tone made it popular with punk bands. New York Dolls’ Johnny Thunders, Mick Jones of the Clash, and the Sex Pistols’ Steve Jones all played Les Pauls with P90s.

The P90 comes in three varieties; the soapbar – named because of its shape; the dog ear - because of the triangular flaps either side of it; and a humbucker format, designed to fit in the routing holes on a humbucker-equipped guitar.

There are also dual-coil versions, where the coils are mounted either one on top of the other, or side by side, designed to eliminate the hum associated with single coil pick-ups. In the above and below configuration, the bottom pick-up collects very few vibrations from the strings, but the phasing of the signal means that the hum is cancelled. The side-by-side configurations works like a humbucker, and sounds very much like it too.

In addition to Gibson’s Les Paul and SG guitars, this popular little pick-up has also been used in Epiphone’s Casino and Riviera, and Ernie Ball’s Axis series.

You can find more demos of the P90 on You Tube here.