While his guitar gently weeps

Ed Jackson typifies the thousands of guitar builders around the world for whom 'having a go' turned into an all-consuming passion. 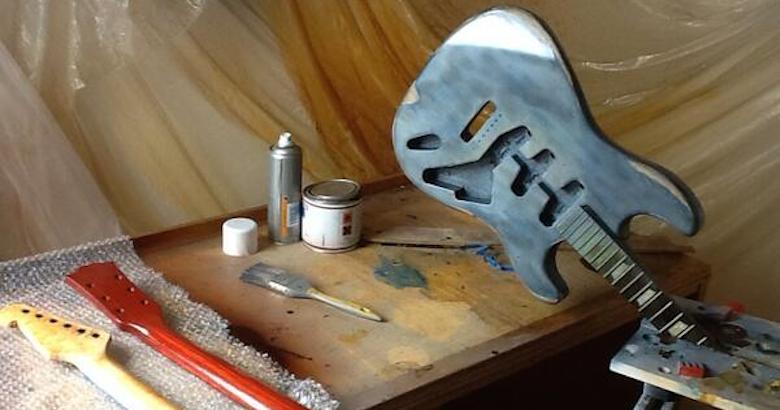 Ed Jackson's dream of being a rock star didn't work out. Like many of us, he wanted nothing more than to spend his days rehearsing and recording and his evenings taking to the stage with a guitar over his shoulder.

Unlike many of us, Ed didn't just give up, he pivoted and turned his love of the guitar into something else. He started making custom guitars and guitar parts and turned it into a business, E Jackson Custom.

'Once I realised I would never be a rockstar - I switched to concentrating on building and modifying rather than posting low quality, painful videos of myself unable to sing on the internet. I've always loved setting up, jigging and modding/customising guitars,' he told us.

Unlike most of the luthiers we've spoken to, Ed's introduction to building guitars came shortly after buying a terrific guitar. 'I got myself a gorgeous Gibson SG Custom '61 Re-Issue in ebony (still have it of course) in December 2012 - played the heck out of it for about a week and then decided I wanted a Gibson Custom Black Beauty - in no position to buy one - I decided to make one for myself -  to spec. It kind of took off from there really,' said Ed, almost wistfully.

We asked, as we always do, about that first guitar and how he came to build it. '[It] was an SG replica - painted in gold - I accidentally sprayed the blue on at too close proximity - causing a lot of run and drip down the body - frustrated at first - it dried into a nice 3d effect layered nitrocellulose finished. It had been dubbed "while my guitar gently weeps".'

Ah, many a lovely finish has come from a happy accident.

When it comes to the process of building, Jackson's mantra is 'keep it simple,' which makes a great deal of sense. 'Look after your tools - passion, aim for perfection. You will be very proud of the outcome,' he advised.

While Jackson's guitar-building career is only just getting started, he's already learned plenty of lessons. He explained: 'knowing that I produced an instrument that screams through an amplifier. It has taught me a lot as well about general woodworking, electronics, painting etc...I am also satisfied knowing that it is unlikely I will buy a guitar from a shop again.'

Jackson also remembers what it's like trying to build his first guitar on a limited budget, so has plenty of advice for budding luthiers. 'For total beginners - I would take your first (or 2nd if you are emotionally attached to it) guitar and dismantle it. Completely take it apart - familiarise yourself with how it is built, its cavities, under the "hood" - maybe strip it and repaint it? Get a feel for it to build your confidence.' 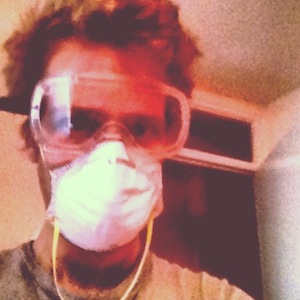 And when it comes to buying tools, Ed is all in favour of a frugal approach. 'Don't blow money on a workshop of tools - tool collections grow with time - use your imagination or design your own tools (I used to sand cutaways on guitar bodies by strapping sandpaper to a tube of Pringles and doing it that way. Essential tools you can get from your local DIY store. The internet is also a great resource for paints and luthier tonewoods/blanks. I get my clamps and clips from Poundland [a UK discount retailer].  Don't know where I'd be without my fretboard clamps!'

And with our time nearly up, we asked the final question, the quest for tone. What did Ed have to say? 'Tone varies on many things - ultimately everything that goes into a guitar /hardware/pickups/electronics/wood choice/the player themselves?? - but generally - choice of wood and for me - not killing the tone with finish. Too thick a finish can nullify the resultant tone. However I recently read somewhere that nitrocellulose "allows the wood to breathe" - this is simply not true - the wood in your guitar stopped breathing once it was cut down. It's dead!'

The wood might be dead, but Ed Jackson's guitar building business is only just getting started and it seems to us that his passion will ensure it's brilliantly successful.