Joe Naylor built his first guitar in 1987 and ten years later, after training as a luthier,  started Reverend Guitars. We asked him what it takes to make a great guitar. 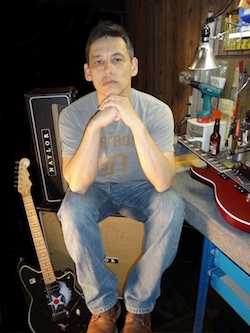 ‘I got my first electric guitar at age nineteen, and had it completely apart within an hour. It was totally fascinating, I thought it was the coolest thing ever invented, and was hooked for life,’ enthuses Joe Naylor when we ask him how he got started. ‘I  grew up in a musical family, and was always a big music fan. And as a kid, I was very mechanically inclined, doing all the stuff kid's did back in the day: model airplanes, rockets, slot cars, explosives, and I also worked as a bicycle mechanic.’

After graduating from a college course in product design, Joe headed to the Roberto-Venn School of Luthiery in Phoenix for formal training, something that has stood him in good stead.

‘I eventually opened a repair/used/vintage store in the Detroit area, which morphed into Naylor Amps, which I then sold to my business partner in 1996, which allowed me to start Reverend Guitars. I built the first Reverend guitar in 1997,’ he explains.

Naylor’s first guitar was built during that formal training. ‘Part of the requirement to graduate was to build one acoustic and one electric guitar. I still have that acoustic. But I sold the electric to somebody in Kalamazoo, it's transparent blue, and looks like an upside-down Fender Katana... it was the eighties, and I was really into metal,’ he tells us, enthusiastically.

Given Joe’s experience and expertise in building guitars, we couldn’t miss the opportunity to pick his brains and ask him about what goes into making a great guitar. ‘The single most important factor is the person designing the guitar. The designer's eyes and ears, the ability to make logical design decisions, the intimate understanding of classic designs, a complete knowledge base combined with years of experience... these are the kind of things that ultimately determine the success or failure of the final product,’ he explains.

‘Materials, components, and methods are overrated and secondary. Sure, it's important to have a working knowledge of these things, but it's far more important to know how to use these things judiciously, and in combination with each other, to achieve your design goal.’

As for the elusive 't' word, Joe believes getting the right tone is all about ‘Knowledge.’

‘Knowing what each material, component, and build method brings to the tone recipe. Study all the classic designs and figure out what makes them sound the way they do... why does a mahogany/maple Les Paul sound great, and yet, so does a masonite/pine Danelectro!?’ Warming to the theme, Joe continues ‘There's no one right formula, there's a million ways to build a great sounding guitar. But you need to be armed with knowledge in order to pick and choose the ways that will create the sound you hear in your head.’

And when it comes to starting out, Joe has firm views on where you should spend your money. ‘On repair tools. If you want to become a good builder, you need to do repair first. Besides, you won't make any money building guitars at first, so you'll need to do repair just to survive. If you're doing it just as a hobby, I'd buy some cheap used guitars and parts first, and throw together some Frankenstein projects. Fine tune your basic skills first, before you attempt a really nice build,’ he explains.

As for Naylor’s own guitars, like most builders, he loves seeing and hearing them being played. ‘ would have to say the biggest thrill is seeing my design on stage. When you see your guitar in the hands of a really good musician tearing it up in front of a crowd, you can't help but think "mission accomplished.”’