If you thought the only option for pick-ups for your next build was a big brand, think again. Ash from Oil City Pick-ups tells us about the pick-ups he makes and why he loves making them in part 2 of our interview.

We wanted to know more about how Ash got started, making pick-ups, after all, isn’t the kind of thing that most guitar-playing teenagers find themselves doing for a living. That engineering background, it turns out, was vital. ‘I made my first one when I was about fifteen … out of bits and bobs I found in my father’s workshop. I dabbled for a long time … many guitar repair men do. I fixed them, occasionally rewound them, but it took one of my guitar students (I teach as well … or used to when I had time) to persuade me to put my pickups on the market.’

That was two years ago, and with nearly 40 years making pick-ups behind him, Ash was well-placed to take his hobby full-time. But back to that first pick-up. Ash explained that it was ‘pretty basic and didn’t work too well … just an old magnet I found and some wire I had no idea of the gauge of! It got me understanding the principals however. My first stab at saleable pickups was a set of Strat ones. Wound on my self-built ‘mark one’ winding machine  (a drill stand and a tape recorder counter and some other  odds and ends). I’ve built all my winding equipment over the years, and I’m now on my ‘mark five’ machine called Gloria.' 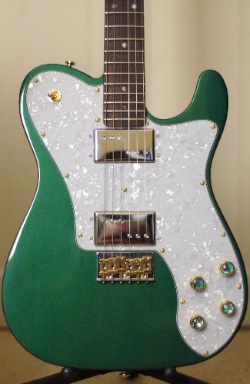 We couldn’t let Ash go, of course, without taking the opportunity to pick his brains about making pick-ups and getting that elusive perfect tone. Ash’s advice? ‘Have the best gear you can afford if you can … but realise the real tone comes from inside you … not from the stuff I … or anyone like me builds … and listen, really listen. Of course having good pots and the right value caps helps  (though with caps don’t believe any of this “vintage paper in oil” bull … all good caps sound the same).

Before we left, one last question occurred to us. Let’s say you had a Les Paul and you were going to replace the pickups; humbucker or P90? ‘For me at the moment it would be a P90. But that’s because I’m a terrible gear hound, and have far too many humbucker equipped guitars! I love the P90s wonderful combination of soft and sexy, that becomes rude and challenging when you push it hard. Very organic … and very  … er … female. So a nice black LP with a Bigsby and a pair of my FireWatch soapbars, or my Mighty Ninety humbucker sized P90s please!’

Oil City Pick-ups may be a relative newcomer, but Ash has big plans for the future. ‘I have a whole load of humbuckers coming out over the next few months, and that will give OCP the product range to rival the big boys: from Strat sets and humbuckers to Wide Range replacements and vintage Gretsch style pickups.  I want to stay in touch and grounded with my customers,  so,  however I decide to expand in the future, you will still be able pick up the phone and talk to me personally. I want people to “get” the idea of a UK company that uses as many UK suppliers as possible and is proud to contribute to our economy. Oh, and affordability is still top of my list … I don’t subscribe to the hogwash that if you charge telephone numbers for your products people will take you seriously. They just have to sound good.’

That sounds very good to us.