How to Identify Parts of a Guitar

Ok, so most of us know our headstock from our bridge, but a little reminder won’t do any harm, will it? 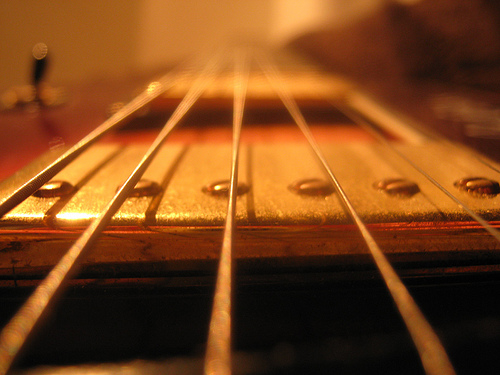 If you live and breathe your instrument, identifying parts of a guitar will be as familiar as the names of your own children. But if you’re just starting out, or you’ve found yourself in need of a replacement part, getting the terminology right doesn’t come as easily. Worry no more and read our easy guide.

Parts of a guitar

The body is the big bit of wood at the bottom of the guitar. It’s hollow on an acoustic and, usually, solid on an electric guitar (unless it’s a hollow-body or semi hollow body, but we won’t get into that here).

A thin piece of rosewood glued onto the top of the neck, the fretboard houses the frets and often has dots or other shapes inlaid in order to mark out the 3, 5, 7, 9, 12 etc frets.

At the top of the neck is the nut, a small piece of bone or plastic into which fine grooves are cut to house the strings.

The headstock is fixed to the neck (unless you guitar’s had a particularly nasty accident). Depending on the make an model of guitar, it will either have three machine heads on each side, or all six on one side.

Also known as tuning pegs, these are crucial to tuning your guitar and keeping it there. Machine heads are one of the most important parts of a guitar. As such, it’s worth spending a bit of money buying the best you can find.

A lump of metal which feeds the strings through saddles, which can often be adjusted to alter the ‘action’ of the strings, to the tailpiece.

Sometimes plain, occasionally fancy, the tailpiece has one job – to keep the strings taut.

The pick-ups take all those excited electrons around the vibrating strings and turn them into an electro-magnetic field, then into an electric current which is fed to an amplifier where it’s turned into the beautiful sound of an electric guitar. Pick-ups consist of little more than a coil of copper wire, which creates the magnetic field. Depending on the type of pick-up, it may have two coils. Two-coil pick-ups are known as humbuckers.

Partly ornamental, partly functional, the scratch plate’s – or pickguard’s – job is to stop you, err, scratching the body of your beautiful guitar with the pick. It’s often removed by guitar players who either find that it gets in the way or prefer the look of their guitar without it.

Knobs to you and me, ‘pots’ is short for potentiometers, these control the volume and tone from the pick-ups. USed creatively, they can produce some, errr, interesting effects.

This allows you to switch between pick-ups. The number of available positions depends on the number of pick-ups on the guitar. For two pick-ups, there are three positions, Rhythm, for the rear pick-up, Treble, for the front one, and a central position for both.

There you go, those are all the parts of a guitar you need to worry about.