Got an iPad and a guitar? Then you’ll want to read our guide to ten of the best apps you can buy (or in some cases download for free). We won’t claim this is a definitive list of the ten bets apps for iPad toting guitar players, that would be silly. But they’re ten of our personal favourites. 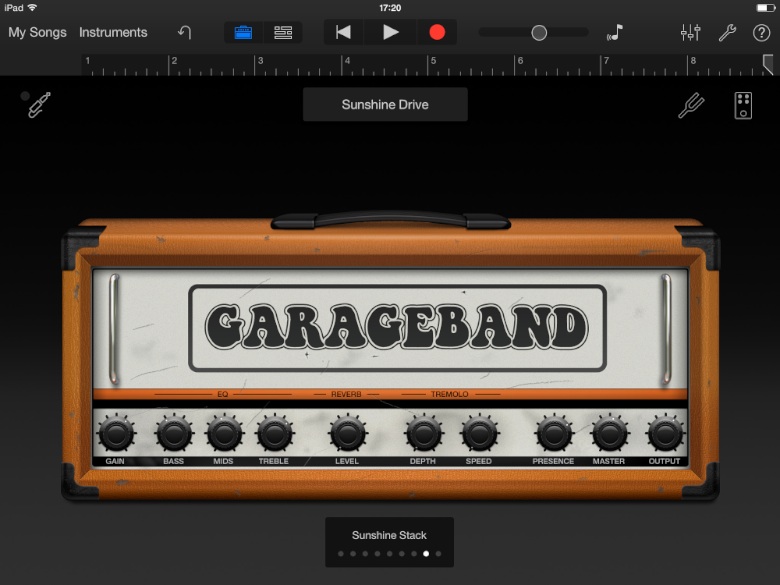 Agile Partners claims that AmpKit+ is both the easiest to use and the best-sounding amp modelling app around. And while the latter is a matter of taste, it’s difficult to disagree with the former. AmpKit+ comes with four amps, seven amp channels, 10 effects pedals, and eight mics. In-app purchases allow you to add 29 separate amps with a total of 50 amp channels, 30 pedals, 25 cabinets and eight mics. Like Amplitube (below), AmpKit+ is Audiobus compatible, allowing you to use it as input, effects, or output. You can play along with music from your iPad’s Music library, share settings via email, and the whole thing looks fantastic.

Amplitube is a guitar effects modeller which comes with 11 stompboxes, 5 amps and cabinets, and 2 mics. There are 36 preset combinations to help you sound like your favourite guitarist, and you can create your own from scratch. There’s a metronome and tuner, and you can even import tracks from your iPad’s Music library, strip out the vocals and play along. In-app purchases allow you to add presets such as Slash and Hendrix to your armoury, while more in-app purchases allow you to turn the included one-track recorder into an eight-track, and create a full-on DAW.

It works with most guitar adaptors, including IK Multimedia’s own iRIG HD and iRig Stomp, and yet another in-app purchase adds the ability to control the app with MIDI signals. If the price is a little steep, there’s a free version available so you can try it out.

Anyone who has every picked up a musical instrument knows that the real fun is in learning to play your favourite bits of your favourite songs. Capo will help. It allows you to slow down any song in your iPod library, without changing the pitch. Sections can be looped, and you can mark those parts you want to learn. We like the ability to switch to Capo when you’re listening to music and pick up the track at the point you paused it.

Price: Free with iPhone or iPad

Garageband is one of the jewels in Apple’s crown, and that’s saying something. Updated for iOS 7, it now allows you to record up to 16 tracks. But its the guitar features we’re interested in and they come in two separate instruments. The first is Smart Guitar, which displays six strings on screen and allows you to tap or swipe them to play notes or chords, or even bend strings.

More interesting, however, is Guitar Amp which models 32 different combinations of amps and stompboxes from sounds like American Tremelo and Brit Pop to Industrial Overdrive and Dublin Delay. You can create you’re own, too, by putting together one of the nine amps with two of the ten available stompoxes. It’s not just a great recording tool, it’s a terrific jamming app too, allowing you to jam with up to three friends over Bluetooth or wifi.

Guitar Chords is a chord library which makes it easy to find different versions of dozens of chords. The large interface makes it easy to see and to use as you play. Just tap a key and then the chord type, and it’s displayed on the on-screen fretboard. Note names are displayed above finger markers, and you can play each note or the chord as a whole. Both left and right handed layouts are included.